I didn't get absolutely everything I wanted to do this weekend done, but

On Saturday, I headed over the bridge to the Docks Cottages, open for Bristol's Open Doors Day, to have a nose around.

The cottages had lots of fairly random stuff in them, including this little model convey, which an elderly lady seemed very keen to demonstrate to me. She was a bit odd.

Then I headed to Underfall Yard, one of the local shipbuilding yards. The buildings with the Floating Harbour control machinery were pretty impressive, but I was most impressed with this bloke, who was renting space to build a catamaran in his spare time. He's been there five years so far.

Then a quick jaunt down the harbourside, past this sailing school, to Brunel's Buttery, to have an exceptionally unhealthy lunch.

I got tons of dull stuff done, too, like the laundry and tidying the flat, but I don't think there's much need for pictures there. 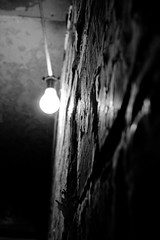 On Sunday I spent a little time underground, taking photos in the Clifton Rocks Railway, an old water-weight-driven funicular, and ignoring the doubtless-fascinating talk from the guide, which I'd mostly heard before. 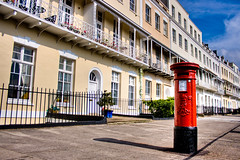 On Saturday I found out I'd won £50 on the Premium Bonds, so I used the money to buy a copy of Photomatix, for HDR (high dynamic range) photography. So, on the way back from the railway, I took a few photos of this postbox on Royal York Crescent, so I could experiment with it. I think it came out pretty well.

Thrillingly, I then did my tax return. Yawn. But at least it's done. 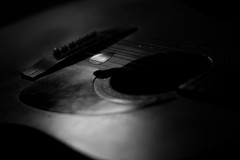 On Sunday evening, I watched the aforementioned Julia Roberts film, during which I got bored enough to take this photo of my guitar entirely by the light of the TV. 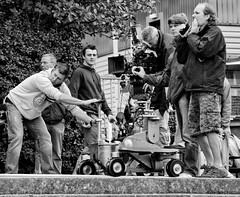 And a pretty awesome weekend was rounded off by floating past the film crew on Monday morning's journey to work, where I got this picture, which I like a lot.

And that's about it. I didn't get around to the haircut, or recording any drums, or roughing out a site design. But I think I can live with that. I feel pretty damn' recharged and go-getting right now...