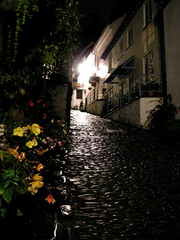 Clovelly Night
Originally uploaded by gothick_matt
I spent the weekend in Clovelly, which for those of you who don't know, is a little village on the Devon coast (here), mostly consisting of a single cobbled street. No cars are allowed, and heavy items travel by sled.

My weekend wasn't quite as quiet as you might expect from that description, as I went there for my friend Ruth's birthday party. Ruth and Steve, who I know from Uni, live on the main street. Mostly I spent the weekend feeling too-tired-to-be-up-at-this-time-in-the-morning. I have also discovered that I like recent Foo Fighters stuff, and the Kings of Leon. Note to self: put those on shopping list.

I took this photo on the way home from the party, at some unknown time in the morning (according to the EXIF, my camera seems to think it was before 11pm, which is bobbins, as we'd already had at least one of the potential two o'clocks that happened on Sunday morning as the clocks went back...)

Anyway. Nice weekend, although I'd have been better company if I'd had any sleep and de-stressing time recently. The good news is that I've arranged to buy a week's extra holiday from work, so I'm going to be taking some time out soon, which will mostly be spent relaxing by myself. All the holidays I've been on this year have been with other people, and I think I need some me time pretty soon...
Collapse