They seek him here -- edited with picnik
Originally uploaded by gothick_matt
I've been trying out picnik, which is an "online" image editor. It's actually better than a fair few traditional image editors I've used, and can take your pictures straight from LJ or Facebook or a couple of other places, edit them, and save them back without you having to faff about at all, really.

My plan to try out its more serious image editing features properly was rather scuppered by them putting some seasonal editing tools out for the Christmas period, though :)

Kudos to picnic for having something that complicated work perfectly in Safari, too. If you give it a go, bear in mind, though, that it can be a bit slow starting up. There are a couple of long gaps with a blank screen (between progress bars) where you might think it's died, but if you persevere, it springs back to life. Once it's working, though, it's fast, considering what it does. 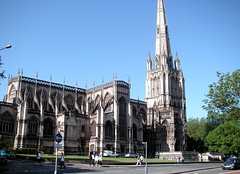 PICT0059.JPG
Originally uploaded by gothick_matt
More people are using my photos: This time, the Journal of Church Archaeology just sent me an email asking if they could use this photo for their next journal. I usually seem surprised by the pictures of mine people choose to use, and this is no exception; I much prefer this one of St Mary. It's almost impossible to get a shot of the Chruch without cars and street signs and overhead cables intruding.

Regardless, it's always nice to feel that some of my output is being put to some kind of purpose :)
Collapse