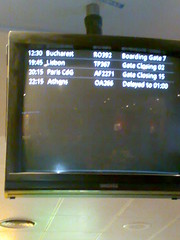 23/12/2007
Originally uploaded by gothick_matt
Those of you who were jealous of my nipping off to Crete might take some solace in the fact that I'm still not there yet, dammit. Still, it looks like I was lucky to get to Greece at all, even if it is a few hours late.

I didn't get too bored during the delays at Heathrow, because I bumped into a nice lady called Liz who works as a 3D animator in the film industry, and we were brought together by our philosophical attitude to things going wrong when travelling, and a mutual desire to get away from the panicking woman in the queue behind us who had rather the opposite approach. So, we had dinner, chilled out for a while, and finally got on our plane at about 1am, knowing we were both going to miss our connections at Athens.

As is the way of things these days, Liz also pointed herself out on Facebook for me and I sent her a message so she could friend me when she gets back in the country.

On the flight, I cycled between listening to Tony Robinson read Terry Pratchett's Making Money and waking up and winding it back to the last place I could remember.

And now, after about eighteen hours travelling which has involved several meals, the wrapping of a very large teddy bear (Flickr friends should watch out for a couple of photos of that one), an airline bread roll that I didn't know whether to eat or bring back to the office and use as a whiteboard eraser, more time spent standing queueing than actually flying, a pat-down by security (the second time I went through a detector, I was so tired I forgot to take my belt off), much rudeness by various international cafe staff and quite a lot of confusion, I'm sitting in a departure lounge in Athens, waiting for only a few more short hours before I can get on a flight to the place I actually want to end up.