Last night was rather fab. I hopped on a train to London to go the birthday party that Arry had arranged for Karina. Luckily it was in Marylebone, so stunningly convenient for Paddington.

My plan was to catch the last train back to Bristol at about 11:30, but the party was most excellent, and the casino theme and associated roulette playing meant that the time passed really quickly, and it seemed foolish to leave so early.

Then K offered me a spot on t'sofa, so I gave up on the idea of rushing off and instead succumbed to a night of gambling, nattering, drinking1 and otherwise excellent socialising. Much fun was had, by many people in some quite swanky outfits -- Arry had said to dress for the occasion -- and I enjoyed it all.

All, including the going back to K & A's place with several other revellers and not actually quite managing to go to bed.

As a result, I'm now back in Bristol, and feeling remarkably together for someone who's been up for nearly 30 hours. Now all I've got to do is make it through to a sensible time to actually go to sleep, i.e. one which won't completely screw my body clock while still allowing me to get lots of catch-up kip. Ho hum.

I've stopped drinking the caffeine, which has probably been propping me up quite successfully. When I crash, I'll crash...

In other news, I'm too knackered to think of other news. More tomorrow, maybe, if I haven't changed my name to Rip Van Gibson and decided to hibernate for the summer (aestasate?) 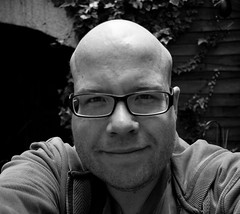 new-glasses-3735-1
Originally uploaded by gothick_matt
...in other news, I have new glasses. Although I'm going to have to see if I still have problems with the left lens after I've given them a day or so more trial; the right one's crystal clear but the left doesn't seem so hot for distance. Maybe I just need some time to adjust.
Collapse