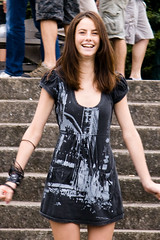 Actress I
Originally uploaded by gothick_matt
Can anyone identify this exuberant actress, apparently from E4's Skins?
Apparently, this is Kaya Scodelario, otherwise known as Effy from Skins. She excitedly jumped up and down and waved at me as I took a few pictures of some location filming on the way past this morning, which I took as an indication that she probably wouldn't mind the photo being published :)
Collapse