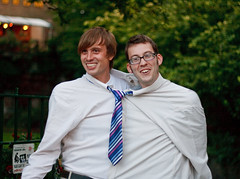 You do see some strange things in Bristol.

On Saturday I went on the second annual Worldwide Photo Walk, which was great fun. Basically just a wander through Bristol from Castle Park to Temple Meads, then on to the Centre via Queen Square.

The Siamese twins here wandered out of the old Quaker burial ground (no, really) near St. Mary Redcliffe as I was passing. I never found out why they were dressed like that.

Other highlights included getting a photo of a policeman in a railway station without getting arrested (a fairly difficult feat these days, only possible because he was distracted by fining another photographer £50 for trespass) and the general camaraderie and relative safety of walking through a city on a Saturday night as a mobbed-up bunch of photographers.

I'm not sure which is my favourite picture of the night. You're allowed to enter two into the Photo Walk competition (although you don't have to enter.) When I was processing them, it was this one of the wreckage of the old brewery I really liked, but it works less well in smaller web sizes. Here it is presented in a more Lightroom-y fashion. I also like the starkness of this other architectural ruin. But the Siamese twins are definitely a contender, just because of the strangeness and the comedy value...

Anyway. The set's here, if you want to see them all.

Apart from that, I've been fairly busy. Among other things, I appear to be preparing to take up running, which is scary. More on that later... For now, I'd best get to bed. I was knackered all day today -- possibly cumulative sleep debt, not helped by staying up until 2am on Saturday night. Well, you know, we only stopped when we ran out of light, and then we happened to be next to a shiny new Thai restaurant on the centre...
Collapse