Strikes me I've been putting off updating for ages. This is partly because I was on holiday and away from a keyboard for a while, and partly because I've had the impression I should play catch-up and blog about everything that's happened since the last update.

This is clearly pretty unrealistic, especially given the amount of free time I've got at the moment.

So, I will probably revisit some of this in detail, but for now here's the precis:

First week off, hung around doing bugger all until I felt vaguely human. Second week off: Devon, Steve, beaches, whistle-stop tour, tramping around Dartmoor, finishing in Paignton. Then

Back to work, finished the Couch to 5K plan (so can now actually jog for 5km without stopping; have impressed myself), finally unwound and cheerful enough to start tidying the flat properly, finally ordered new sofa.

That brings us all the way to Saturday. Yesterday I went for a jog, trying to see just how hard going uphill is (answer: very hard), and then met up with the Bristol Flickr crowd for a walk around the harbour. There were model speedboats, which were cool: 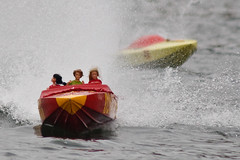 And that's about it.

As I said, I'll be going back and filling in some stuff, plus processing a boatload of photos, plus finally saying thanks to a certain

spongebobjess who sent me something way cool just before my holiday which I've still yet to take photos of (or perhaps video would be better? Hmm...) plus, of course, whatever stuff happens from now on. Gah.

Can somebody slow the world down a bit, please? I'm getting dizzy...
Collapse