Bleurgh. Bit of a washed-out nothingey day today. Slept in late, woke up with headache. Watched trashy TV for hour, finally got out of house.

High point: having failed to get in touch with my usual date for arty outings, I was resigned to going around the preview of the RWA's Autumn Exhibition alone. Just as I was taking a photo of the odd bus they have parked outside, my friend and occasional massage therapist Tara appeared, with boyfriend in tow. "I can get you in for free," I said. 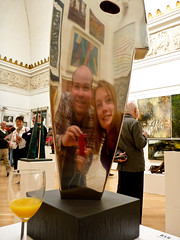 Kieran had to head off home, unfortunately, but Tara happily joined me, which was far nicer than wandering around on my own. Seems as good as ever, with a few old stalwarts mixing with some newcomers, and lots of interesting stuff on the walls.

A coffee, a baguette and some paracetamol on the way home managed to eventually see off my headache, but I've just felt fairly tired since then, so I've done bugger all, apart from some laundry. *sigh*. I'd planned to write off my morning, but it looks like most of the day will be written off, really. I should have had a nap after lunch; I'll never learn...

Anyway. Maybe I can get to bed early tonight and get out for a jog first thing; that should give me a bit of energy for tomorrow.
Collapse