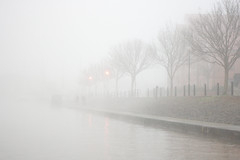 Waiting for the Boat
Originally uploaded by gothick_matt
Fantastic weather in Bristol yesterday. This was the start of the journey to work; you can just see some fellow commuters waiting to be picked up.

I also got a picture of some swans getting airborne that I was pretty happy with.

Today, though, it's my brain that's been foggy, rather than the weather. I had plans to do lots of stuff, but that was rather scuppered by not getting enough sleep last night, and waking up with a another of my headaches. The office party may have had something to do with it, as I had coke[1] and coffee, and so didn't get to sleep until late, then woke up too early.

So, I failed to do much Christmas shopping. Sigh. But I spent a bit of time with my friend Nicki, anyway. And we saw the (very good, this year) Wildlife Photographer of the Year exhibition. So at least I've done something vaguely worthwhile

I'm currently processing photos while listening to Babyshambles, in preparation for tomorrow night's gig. And my headache seems to have worn off, at least. Maybe I'll be tired enough to sleep at some point soon...

[1] No, not that kind. it really wasn't that kind of party. But the lamb was nice, as was the brioche.
Collapse