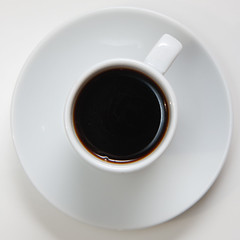 I feel so good this morning. I really do. I've been trying to get more sleep this week, and it's been going very badly, up until last night. I've been going to bed at 11pm, or at least trying to. And every single night I've had problems getting to sleep, and slept badly, sometimes really badly, and felt increasingly like shit as the week's gone on, waking up with a headache on a couple of the days.

Only last night I tried yet again, and had a bit of a problem getting to sleep, and then was utterly out, flatlined for six hours. I woke up feeling a bit groggy, but at least not with a headache. Then I had my morning coffee (taking a photo of it first, as you do) and started to feel a bit more human. Then I read my mail and started thinking about my "to-do" list. Then I meditated, which went spectacularly well compared to most recent efforts.

And now I've had a shower and bloody hell, am I feeling awake and ready for anything. I'm just raring to go.

So, best make top use of this sudden surge of Surprising Morning Energy[tm]. I think I'm going to get a website finished that I've been fiddling about with for far too long, answer a load of personal mail, send someone a present, and clean the bathroom.